Why Super Greens Are So Good For You

How Sun Chlorella is Bridging the Nutritional Gap

But just to be clear . . . these aren’t your mother’s good-for-you greens like spinach and broccoli. Those green veggies are nutritious. But they’re not like these . . . 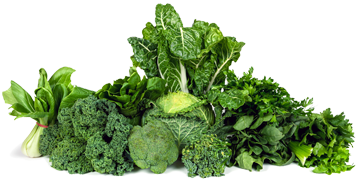 Deep, leafy greens are impotant for every diet.

We’re talking about greens that are super good for you . . . Greens like spirulina, chlorella and cereal grasses (wheat or barley grass).

Clinical studies and preliminary research support the use of these super greens as a complementary therapy for cancer, as cleansing detoxifiers, for regenerative skincare, countering anemia in pregnant women and the elderly, reducing the risk for heart disease and managing diabetes.

But what makes these super green foods so good for you?

The Two Pigments That Make A Super Green Super

Each of these green foods is distinct. Each has unique compounds and combinations of nutrients that make them useful for different health concerns.

But they also all have two super nutrients in common . . . and in many ways, these nutrients are so important, they are what helped create the super green category.

All these super greens are super rich in chlorophyll and a class of pigments called carotenoids. Super greens easily beat spinach, carrots and other vegetables in their concentrated delivery of these nutrients.

And when it comes to health benefits, these two pigments have an exceptional amount of research demonstrating their prowess in keeping your body going strong.

Chlorophyll has a long history of evidence-based use for wound healing, internal detoxification, countering anemia, cancer prevention and as a topical antiseptic.

As far back as 1950, the Butler University Botanical Studies noted, “A few of the outstanding results of chlorophyll therapy are the rapid acceleration of healing, rapid and sustained proliferation of normal tissue cells, formation of healthy granulation tissue, reduction of bacterial action, relief from pain, itching and burning, and the, deodorization and clearing of malodorous suppurative conditions.” [1]

As this article demonstrated with case studies and clinical trials, chlorophyll developed a solid track record in the 1940’s and 50’s for its health benefits. Chlorophyll was used successfully for post-surgical dressings, internal treatment for problems like ulcerative colitis, and even dental problems.

Antibiotics subsequently replaced some of chlorophyll’s uses. But over 60 years later a synthetic derivative of chlorophyll, chlorophyllin, continues to be used medically in many ways from ostomy care to wound dressing.

Now, a new wave of chlorophyll research is churning through the health arena. Health experts are revisiting this natural green powerhouse again. And researchers are uncovering more and more convincing evidence for using chlorophyll therapeutically.

In one study 30 women in their 40’s took concentrated chlorophyll for 90 days. At the end of the study, researchers measured the women’s level of wrinkling and skin elasticity. Both of these were significantly improved. The researchers found chlorophyll’s antioxidant power seemed to help prevent free-radical damage of the skin. But it goes even further . . .

When they took tissue samples, the researchers found the chlorophyll had increased the expression of pro-collagen 1 mRNA, an indication that the genes that signal collagen production were turned on. [2] In other words, chlorophyll seems to help boost collagen production. And collagen is critical for connective tissue health.

Research on chlorophyll-rich super greens like chlorella and spirulina have shown that supplementation can improve red blood cell counts. [3,4] Of course, these studies have not proven that chlorophyll’s chemical structure is behind these results. But they certainly add to the evidence!

In one population study in rural China with high rates of liver cancer caused by fungal toxins, when people supplemented with a chlorophyll derivative, they reduced the amount of markers for this fungal toxin damage in the body 55%! [6]

The Hidden Power Of Yellow


Carotenoids, the other major class of pigments found in super greens, also have a big resumé when it comes to health benefits. They’ve been shown to play a role in preventing UV damage to skin, keeping your eyes sharp, bolstering your heart and supporting lung health.

There are at least 50 different carotenoids in foods. A few of them stand out as particularly critical to your health . . .

Beta-carotene is perhaps the most well-known. It is the orange and yellow pigment in carrots and squash. It’s also hidden under chlorophyll’s green in leafy greens. Your body turns beta-carotene into vitamin A.

Hardening of the arteries is often linked to free-radical damage. Beta-carotene’s antioxidant powers may help prevent this. Epidemiological studies have shown that people who eat lots of beta-carotene rich foods and who have more beta-carotene circulating in their blood have a lower risk of heart disease and arteriosclerosis. [7]

In one study involving disabled older women, researchers found that the higher amounts of beta-carotene in the blood, the healthier the women’s lungs were. In studies on older adults conducted in France and Holland, similar results were documented. [8] The more of this bright sunny pigment in your blood, the better your lung health.

However, there’s an important caveat to beta-carotene . . .

Fortunately, health experts are able to shed some light on these seemingly contradictory findings . . .

Because of this, health experts recommend getting beta-carotene in your body from whole food sources like super greens. It seems to work in concert with other nutrients to create the positive effects noted. [9]

In addition to beta-carotene, some super greens like spirulina and chlorella, contain the carotenoids lutein and alpha-carotene. In a 2010 study published in the Archives of Internal Medicine, high blood levels of alpha-carotene was – simply put - associated with living longer. Based on data collected over a 14-year study period, people with more 6-8 micrograms of alpha-carotene per deciliter of blood had a 34% lower risk of death than people who had close to no alpha-carotene in their blood.[10]

Lutein, another super green carotenoid, is beloved by eye doctors. A 2004 study published in the Journal Optometry found that when the concentration of this pigment increases in the macula of the eye, people experience better visual acuity.[11]

Eat Super Greens To Get Your Chlorophyll And Carotenoids 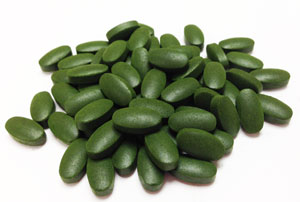 Best of all, for busy people, these super greens offer a concentrated way to squeeze extra nutrition into your packed schedule. When taken as a whole-food supplement or mixed into a smoothie, you can get a day’s worth of nutrition in a single serving!