Move over Vitamin C, you have antioxidant competition in town, and it’s an algae called astaxanthin.  Astaxanthin (pronounced asta-zan-thin) is often referred to as “The King of Carotenoids,” and is becoming increasingly popular for its potent antioxidant benefits. Carotenoids are a class of plant pigments that act as powerful antioxidants and give plants their bright colors. One carotenoid you may already be familiar with is beta-carotene, the antioxidant form of vitamin A, which gives pumpkins their bright orange hue. Astaxanthin is found in coral colored pigment in algae and certain marine animals such as salmon, lobster, and shrimp.But astaxanthin has far more antioxidant power than beta-carotene. Studies have shown that the antioxidant activity of astaxanthin is significantly stronger than beta-carotene, vitamin E, lycopene, and lutein.

Some antioxidant vitamins and minerals lose their antioxidant function shortly after it has been exposed on your skin — similar to how a honeybee dies after it stings you. But astaxanthin remains active for a longer period of time , which gives it much more antioxidant potential. This unique ability makes astaxanthin the superior antioxidant!

There are several food sources that also contain astaxanthin such as:


Astaxanthin is found in most seafood that has a light pinkish color when they’re cooked. Some health experts recommend avoiding over-cooking seafood to preserve the astaxanthin content, as it may deplete when exposed to extremely high temperatures. If you’re looking for a quick and easy way to get astaxanthin in your diet try snacking on dried salmon, or cooking up some lobster or crab for dinner.Astaxanthin can also be purchased as a nutritional supplement in many health food stores. A high-quality astaxanthin supplement will typically use haematococcus pluvialis as the astaxanthin source, which is from marine microalgae.

Astaxanthin Benefits For Your Skin

Astaxanthin may be your new holy grail of your skin care routine. Studies have shown astaxanthin may have photoprotective effects, but since it doesn’t have an SPF, it can’t protect you fully against UV rays.  However, it’s still the next best (and natural) way to keep your skin healthy-looking. If you’re wondering where to find a quality natural product that contains astaxanthin, look no further than Astarella Primetime Skin Cream.

My Personal Experience with Astarella 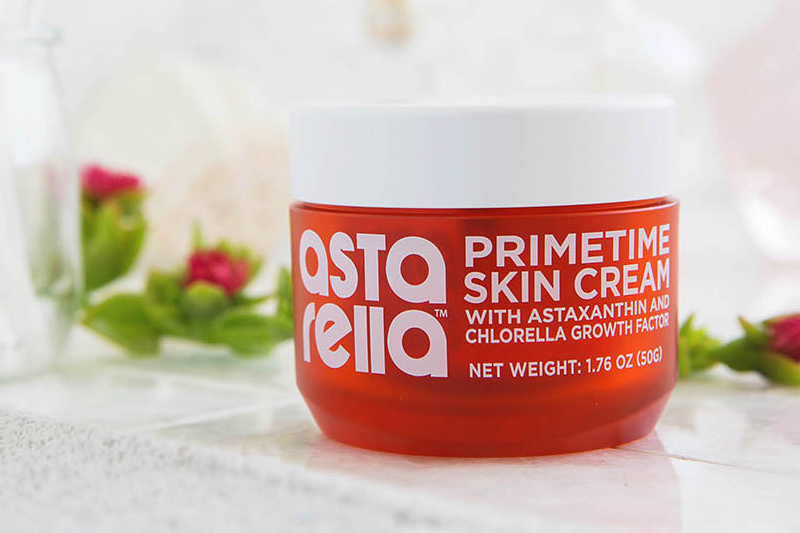 Astarella PrimeTime Skin Cream by Sun Chlorella,
I’ve been using Astarella Primetime Skin Cream since March of 2016, and I never cease to be impressed with the dewy texture of my skin when I wake up in the morning after applying Astarella the night before. Not only is my complexion completely clear, but my pores appear smaller, and my skin texture is considerably smoother than it was a few months ago.
Since I live in the Caribbean, one of my top priorities is caring for my skin properly, against the humidity and sunlight. While I still use a natural sunscreen to protect against sun damage, the photoprotective benefits of astaxanthin offer an extra boost. In fact, my complexion looks so radiant that I no longer have to wear pore-clogging tinted moisturizers to even out my skin tone.
Astarella Primetime Skin Cream contains quality astaxanthin sourced from marine microalgae. Astarella’s one-of-a-kind formula also includes several other natural skin care ingredients that help gently exfoliate, hydrate and maintain younger-looking skin—such as jojoba oil, unrefined shea butter, meadowfoam seed oil and grapefruit seed oil. Astarella Primetime Skin Cream even contains Chlorella Growth Factor (CGF), which is an ingredient unique to the amazing green superfood: chlorella. In my personal experience as a nutritionist, I have yet to find a skin cream that can offer all of these benefits in one, like the Astarella Primetime Skin Cream. This cream is formulated without parabens, gluten, artificial colors, and fragrances. Looking for other ways to help your skin? Learn what chlorella can do for your skin.